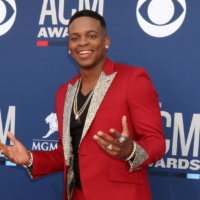 Jimmie Allen and his wife Alexis have welcomed their second daughter together, Zara James Allen, born on October 16.

Allen’s fans were informed that his show scheduled Saturday night in Forest City, N.C., was canceled, just hours before the country star was due to take the stage. Allen posted to Instagram that the concert would be rescheduled due to a “family emergency.”  The emergency turned out to be Zara’s birth, which Jimmie later posted about on social media.

Zara joins her almost 2-year-old sister Naomi, as well a 7-year-old brother, Aadyn, from a previous relationship. Jimmie and Alexis have been together since the spring of 2019, after his cousin’s wife introduced them. The couple were engaged in July of that year and were married on May 27, 2021, at Pennsylvania’s Lake House Inn.