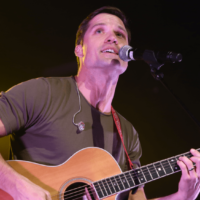 After enlisting Kesha as a featured guest on the remix to his viral sensation “Fancy Like”, Walker Hayes is joined by the pop star in the just-released music video for song.

Shot in Los Angeles and directed by Rehman Ali, the music video takes place in Sun Valley, California at an old-fashioned 1940s hotel called The Pink Motel and Cadillac Jack’s diner (formerly known as Pink Cafe). The clip not only features Kesha and several of her dancers, but also Hayes’ wife Laney. The clip concludes with the entire cast doing the viral “Fancy Like” dance in front of the iconic building.

Says Hayes: “This song came out of a conversation about the misconceptions that celebrities or artists live a lavish lifestyle, and it’s important for folks to know that’s not necessarily true. I’m truly about as fancy as Applebee’s on a date night, so creating a video celebrating the simple moments in life — like watching a movie or drinking box wine — was important to us. Kesha and I each bring our own versions of ‘Fancy Like’ to this, and I love how it came together.”

Watch the new music video for the “Fancy Like (feat. Kesha)” remix – here.

Miranda Lambert shares new video for ‘If I Were A Cowboy’