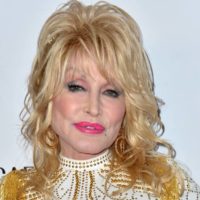 Dolly Parton celebrated her husband Carl Dean’s birthday on July 20 by giving him a nostalgic present. Parton shared a video of herself on Instagram in a Playboy bunny-inspired costume, sharing the surprise she gave to her husband along with the caption: “It’s always #HotGirlSummer for my husband, Carl

In 1978, Parton posed for Playboy wearing the signature Playboy ‘bunny’ outfit on the cover of the magazine’s October 1978 edition. Parton said in the video: “You are probably wondering why I dressed like this and it’s for my husband’s birthday. Remember sometime back I said I was going to pose on the ’Playboy’ Magazine when I was 75? Well, I’m 75 and they don’t have a magazine anymore, but my husband always loved the original cover of Playboy, so I was trying to think of something to do to make him happy. He still thinks I’m a hot chick and I’m not going to try to talk him out of that.

Dolly then held up a plaque that included pictures of both Parton’s original 1978 cover, and a new current portrait of herself in the outfit.  She added: “I was kind of a little butterball in that one. Well, I’m string cheese now. But he’ll probably think I’m cream cheese,” she said with a wink at the camera.